Repairing fringe damage is one of the most common forms of care that we provide.  Fringes are particularly vulnerable to damage - whether through aggressive vacuuming, the pulling of heavy furniture, or just ordinary wear.   As is often the case, the sooner that we can repair and/or restore a damaged fringe, the easier the repair will be.  The series of photos below illustrate a recent repair we did for a client.  In the first picture, the small damaged area is visible.  Not only was the fringe compromised, but part of the pile was also damaged and missing.  As the pictures illustrate, we rebuilt the warp and reknotted the missing pile.  Finally, we bound the fringe so as to minimize the risk of unraveling.
www.traditionalrugrepair.com 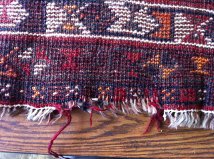 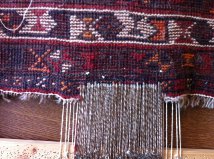 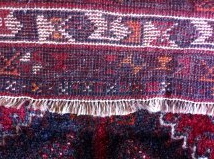 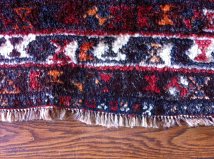 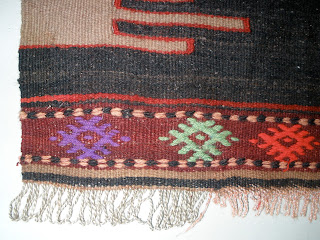 After cleaning the kilim, we rebuilt the warp and rewove the missing sections.  We took care to reconstruct the embroidered motifs (the purple and green motifs were particularly damaged).  We removed the binding of the fringe (the white line along the fringe visible in the "before" picture) while we rewove and repaired the damage area.   After we took the picture above, we rewove the binding so as to minimize the risk of future unraveling.  In addition, we cut some of the fringe so that it measured approximately the same as the original fringe.  --www.traditionalrugrepair.com
Posted by Phone : 212 300 3348 at 9:33 PM No comments: